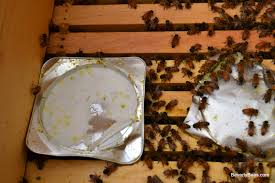 July is turning out to be a challenging month almost every year and not just for us humans but also for bees.  The first two weeks in July seem to be consistently wet and dull. In the 1980’s we ran a Summer Camp in the first two week in July and it always seemed to be wet. And the first two weeks in July are the most important weeks in the year for honey production – clover and bramble are in full flower yielding up their nectar. Early in the month I even got a warning from a beekeeping friend of mine to check my colonies in case they were starving!  I am told Global Warming means we will get even wetter summers. I am expecting a very modest crop of honey this year.
As we move into August, I am preparing the colonies for winter and ultimately for the year ahead. August and September are the key months to ensure bees survive the winter and are ready for the New Year. The bees born at this time of the year have a lot to do – they rear the winter bees so it is vital that are in good condition – sick or hungry bees trying to rear winter bees will mean poor colonies next year. Pollen is vital to build up the fat reserves of the winter bees. Lack of pollen at this time and the presence of disease would mean that the 2017 season is already in jeopardy. The two main tasks are to treat for disease and to make sure they have enough stores of the winter. I do this a bit earlier than most as September tends to be a busy time here.
I will use Apiguard to treat for Varroa. It is vital to follow the instructions.
You need to give two applications per colony at a two week interval.
Peel back the lid of the Apiguard tray leaving one corner of the lid attached to the tray.
Open hive and place on top of the brood frames- needs 0.5cm space above it by using an eke or empty super.
Close hive and replace after two weeks.
Most effective if used in late summer after honey is removed and the amount of brood is diminishing.  Needs temperatures of fifteen degrees centigrade.
I notice the ling heather is just coming into flower. If you have the energy and enthusiasm to move bees to the bog and the weather is good from mid-August into September you can be richly rewarded. Heather honey is dark, vicious and delicious. The bees don’t like working it much and can be very irritable. Only the strongest colonies should be taken to the heather. While there, they have to produce the all important winter bees so the queen needs to keep laying.

Apparently researchers have found that bees produce different vibrational ‘stop signals’ when attacked by predators while out foraging. These signals have different effects depending on the type of danger. A bee delivers a stop signal by giving another bee a brief, vibrational pulse or a ‘head butt’.
If they are attacked at a food source, bees will return to the hive and give stop signals to nest mates who may be recruiting others for the dangerous food source. These signals were known to inhibit recruitment by the waggle dance but up till now researchers did not know what triggered these ‘stop signals’.

This is produced by plant sucking insects such as aphids. It is a sugar rich liquid secreted mainly by aphids (green fly) as they feed on plant sap.
They penetrate the plant tissue (phloem) with their mouthparts and the sugary, high-pressure liquids is forced out of the gut’s terminal opening! Bees and wasps will collect. Trees such a beech,oak, pine, poplar and larch produce honeydew.

1. Forage – essential to have pollen source available all year round – a colony needs up to 200 pounds per year or approximately 10-12mg per bee. Winter flowering heather is a very useful plant.
2. Feed – whenever needed – as thick as possible 2 kilos to 1 litre or 3 kilos to 2 litres. In winter use fondant.  Put fondant over cluster in Feb – leave in plastic container or cover with cling film. Can cut 2.5 kilo bag into smaller pieces. Can spray with warm water to melt. Warm moisture from cluster will also help to soften. When you remove honey – feed and they will store in brood area and have it close to them in winter.
3. Frames only use premium wax. Economy wax is a mixture of waxes. Some advise that you glue frames together as tacks can corrode and frames can come apart. Evostick weather proof glue.

I was passed on the results of research in UL which shows that honey bee colony losses in Ireland were the highest in 29 countries. The loss rates vary considerably between countries. In their survey the highest losses were recorded in Ireland and Northern Ireland followed by Wales and Spain. Problems with queens contributed heavily to the losses.
Dr. Mary Coffey of the National Apiculture Programme says: ‘the highest losses (over 30%) were in some parts of Counties Cork, Kerry and Kilkenny’.
SimonBee Blogs -August 201608.07.2016