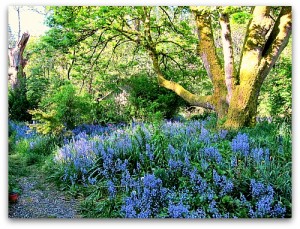 This morning, May 27th I saw my first clump of clover in West Cork. It seems to flower ever earlier. The clump was set between large banks of bluebells and wild garlic. I found the scent of bluebells very pronounced in the evening and the wild garlic in the morning. I am not sure if this is a reflection of my olfactory capacities or a reality of these plants?

I had my first swarm last week. It was a prime swarm and went into a decoy hive. I was quite excited about it because I thought it came from an untreated, feral colony in a nearby roof. I got a shock when I opened it somedays later to discover a queen with a yellow dot – one which I had marked this year and thought I had clipped to stop her flying!

It is now the beginning of June and we are having a great spell of weather – much appreciated by the bees. They have quite a crop gathered from the blossom so abundant this year. The ‘June Gap’, when all these flowers are gone and the clover and blackberry are not yet out – should not be an issue this year as they have plenty of stores on board.

It is a busy time and I am frantically making up frames to make sure the bees have enough space – it is easy to leave them short of space at this time of year. I am moving more and more to using Langstroth hives. I like them and the bees seem to prefer them. Equipment is not as readily available which can be a problem.

The solar wax extractor is working flat out with the sun shine. I must find an outlet for what I have produced! May be I should start making candles. Liturgical candles have to be made of at least 51% beeswax!

Perform regular colony inspections with
Swarm management as required
Check for signs of disease especially varroa. A quick method of checking for mites at is to uncap drone brood – easily visible on pupae at the ‘purple eye’ stage.
Monitor food stores and feed if necessary.
Add or remove supers and extract honey
Queen rearing may be undertaken

One of the less known problems for bees is the toxins in plant nectar. Nectar from Rhododendron ponticum, the common, wild purple variety, contains toxins which are lethal to bees but not to bumble bees.This invasive plant contains a neuro toxin called grayanotoxin (GTX) in its nectar and pollen.
It is not uncommon for plants to produce toxic chemicals to defend themselves against herbivorous insects like aphids and caterpillars. Sometimes these are found in plant nectar which seems strange. Why and how are they impacting on bees?
Researchers in TCD are studying drivers of bee decline and a current project focuses on a ponticum. They have found no impact of GTX on bumblebees but found profound effects on honey bees. Within 20 minutes of consumption the bees began twitching and lost antennal function. Some unrolled their proboscis and could not roll the tongue like structure back in and within 6 hours the bees were dead.
What does this mean for bees and beekeepers. Probably not a huge problem – we do not see honey bees foraging on ponitcum in the field. Honey bees have a remarkable ability to communicate and it is likely that they quickly learn to avoid this toxic plant…..
Two other species R. thomosonii and R. arboretum and R. pratti have been found to be especially poisonous.
You will recognise the effects of poisoning – bees a scattered on the ground in front of the hives usually lying on their sides or backs, legs and wings trembling as if having an epileptic fit. The tongue is nearly always extended.
Why do we not hear more often of bees poisoning with so much ponticum around. It flowers later than most of the exotics and I have not seen any poisoning casualties once the exotics have finished flowering…..

A honey moon or honey-month was traditionally the month after a wedding.
Its origins is unclear – it may have signified a sweet and happy first month but may also refer to rituals involving honey. Many cultures use honey in the wedding ceremony. Hindus often have a bowl of honey present at the marriage ceremony and as the groom kisses the bride he would say to her, ‘honey, this is honey, the speech of thy tongue is honey, in my mouth lives the honey of the bee, in my teeth lives peace”.