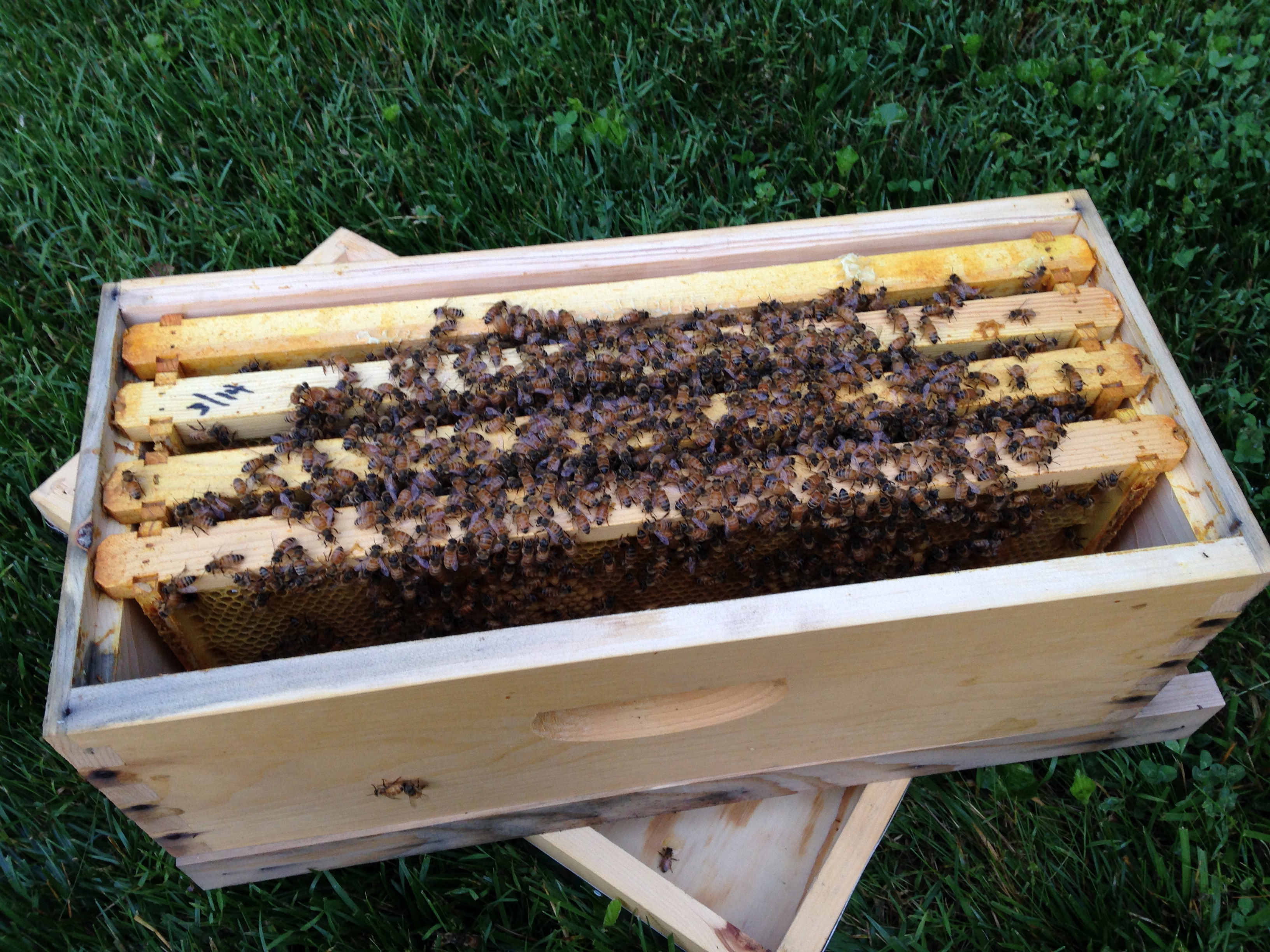 What a spell of weather – the warm sunshine over the last weeks should produce a great crop this year. My bees are still in recovery mode and unlikely to generate any surplus. I am letting them do their own thing this year and hoping they will grow strong and healthy over the season with no stress from me! I am not going through them and am happy to let them throw off a swarm or two into the wild.

It is a great year to have a solar wax extractor!

I was delighted to find an oak tree on our front avenue with bees flying in and out – a wild colony in its natural habitat! It has been a rare sight in recent years. I will keep an eye on them to see if they survive. It would be a great sign if they do survive without any treatment for varroa and the like.

Use of Smoker – one of the mistakes we can make is using too much smoke on our bees. We were all told the story that smoke makes the bees think there is forest fire and as result gorge themselves on honey and ignore the beekeeper! To ensure they ignored us we over do the smoke – the more smoke the better. But all this does is stress the bees and cause chaos among the bees and makes it almost impossible to find the queen.

Use the smoker sparingly – a few gentle puffs in the entrance and then a couple under the crown board should be enough. If it isn’t enough it may be best to leave them alone for the day. You can generally tell by the sound of the colony how much smoke to use. The key is to have the smoker well lit and close at hand so you can deploy it readily. It is also important to put in enough fuel so your smoker does not go out…it can easily happen. It is a good idea to have spare fuel in your bee box.

I was interested to read of a beekeeper who found himself short of foundation and gave the bees some forty year old wax foundation which had white bloom and had lost its aroma. He laid the foundation out in the sun for a few moments until the bloom disappeared and the wax became flexible. He let it cool, put it into frames and the bees built out the combs perfectly!

Nucs are an important resource for beekeepers – you can use them to house a small swarm – to keep a queen – and it can be a source of spare brood to add to a colony. You can also create a nuc as a form of swarm control.

To make a nuc – have a nuc box ready – if you find ‘charged’ queen cells then you must find the queen. She will normally be on a frame of brood – transfer this frame to the empty nuc – make sure there are no queen cells on this frame or on any of the frames you transfer to the nuc. Transfer two or more frames of brood, one frame with stores and plenty of pollen and one frame with honey. The final frame can be a frame of foundation allowing the bees to draw out fresh comb. Shake in at least two frames of bees.

Move the nuc up to 4km away and leave for several weeks – you can leave the nuc in the apiary plugging the entrance with grass  – as it dries out the bees fight their way out and re-orientate to the nuc box. Be sure to remove the grass if they don’t find their way out a day later. The old queen will start laying and the nuc will grow into a new colony. The speed with which this happens will depend on the weather. If the weather is poor it is wise to give them a feed.

The original brood box will have open queen cells – leave a good queen cell and fill with frames of foundation. After three or four weeks you can check to see if the new queen has started laying.

It is a good idea to change combs – some people are recommending changing all the brood frames every year to control disease. I have read about two method you can use.

You need a second brood box with undrawn wax  – take one frame of brood with the queen from the old brood box and place in centre of new brood box.

Block the bottom entrance, put on a queen excluder and make a new entrance above the queen excluder for the new brood box.  Sit that brood box on the old one and leave it there until the remaining brood below has emerged. As they emerge the bees move to the top box to mind the brood the queen is laying.

Give it a gallon of syrup and feed till all the frames are drawn out.

After three weeks all brood in the bottom box will have emerged and so you can remove the bottom box with old frames ready to be melted down. Gradually work the old frame in the new box to the side and remove once it is empty.

Move the hive to one side and put a new brood box with frames in its place – mix of drawn and undrawn frames or just drawn or foundation depending on what you have available – on the old location.

Find and cage queen. Hang her in a queen cage with candy in the new brood box – the bees will let her out in a day or two. Shake all bees off the frames of the old brood box.

Give them a gallon of syrup and feed till frames are drawn….it might be an idea to put a queen excluder under the brood box to prevent queen absconding! It can happen. Once there is brood you can remove it.  You do sacrifice some brood, so do it early in the season before much brood has appeared.

The most important thing about changing the frames is that stocks have clean drawn fresh frames for the season and you have removed any pathogens and chemical residues that may be in the old frames.