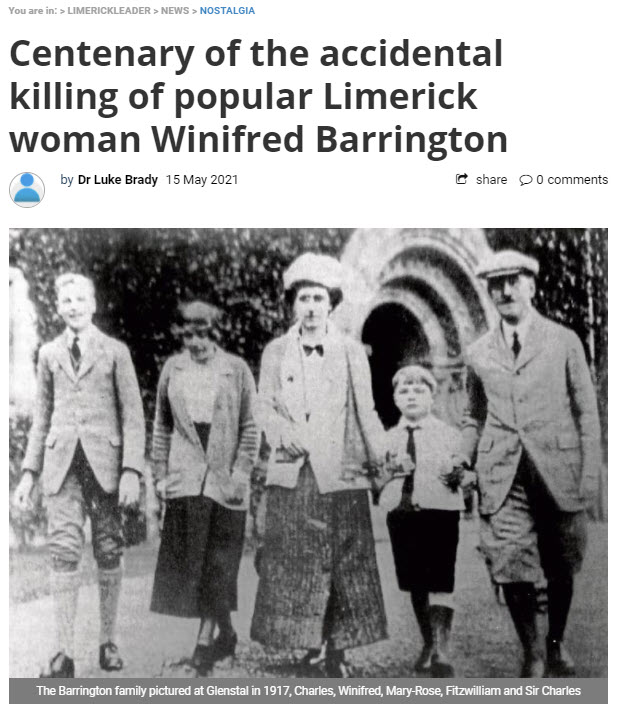 THE turbulent year of 1921 in Irish history has already spawned a series of commemorations relating to tragic events in the history of Anglo-Irish war of 1919 to 1921.

One such unfortunate incident which perhaps is largely forgotten outside of the Limerick region was the almost certainly unintended killing of Winifred Barrington, only daughter of Sir Charles Barrington of Glenstal Castle in the townland of Murroe on May 14 exactly 100 years ago.

By all accounts Winifred was a popular and well liked, if somewhat feisty young lady around Murroe and surrounding environs of County Limerick. She had served as a nurse during World War One in Queen Mary’s Auxiliary Hospital, Roehampton, and later in France with the London ambulance division during the European war before returning home to Glenstal.

On the afternoon of May 14, 1921 she set out on a pony along with her friend, a Miss Coverdale, with the intention of going into the nearby town of Newport to link up with a Captain Gabbeth, a friend of her father’s and some others, plus unfortunately for Winifred, a District Inspector Harry Biggs of the Auxiliary Forces who was one of the most hated of The Black and Tan Officers around the whole South of Ireland.

D.I. Biggs was particularly disliked around the Newport area because during the previous four months or more he had treated the local population around Newport with particular disdain and terror, taking parents of suspected Republican supporters as hostages, when out on his military patrols, threatening and beating suspects, burning houses and on one occasion at Silvermines, forcing an unwilling section of Mass attendees, coming out of church, reluctantly to sing God Save The King by firing bullets over their heads for encouragement.

Whilst passing out the Gate Lodge of Glenstal on her way to Newport, a Mr O’Brien, one of Sir Charles long-standing employees, with whom Winifred was particularly friendly, and who had served with the Irish Fusilliers in the Army of the day in Canada, Egypt, and India and who suspected where Winifred might be heading, tried to persuade her not to go – saying ‘I am a soldier myself but I would not dare to speak to those soldiers – i.e The Auxillaries – from even across the street’.

Sadly, Winifred being a little headstrong, did not heed Mr O’Brien’s advice and proceeded towards Newport with her friend saying to Mr O’Brien that because she had been in the ambulance service and the Flying Corps during the Great War, she need not fear anyone!

Having arrived in Newport, Winifred joined up with Captain Gabbett at the residence of a Major Kingscote, a Lt. Trengrouse of The Oxfordshire Light Infantry, and subsequently D.I. Biggs, with whom Winifred had a passing acquaintance.

Following afternoon tea in Major Kingscote’s home, Winifred, instead of taking her pony back to Glenstal, unfortunately accepted a lift towards Glenstal with D.I. Biggs in his military vehicle. He was due to return to Aldershot on the forthcoming Whit Sunday and because of the traumas he had inflicted on the Newport and surrounding population, the local Republican volunteers had vowed he would not leave Ireland alive.

Probably based on some local information that the party was heading back towards Newport, a group of approximately twelve Republican Volunteers assembled around the downslope of Coolboreen Bridge on the Newport Road, armed with shotguns and rifles.

As D.I. Biggs vehicle approached the downslope and bend of the bridge, in the gathering gloom of darkness of the evening, the Volunteers opened full force fire. D.I. Biggs was immediately shot dead, whilst Winifred who was sitting in the front seat adjacent to Biggs and unfortunately wearing a military style cap at the time, was cleanly shot through her lungs and legs with bullet fragments. She was thrown out onto the roadway unconscious and died shortly afterwards from haemorrhage and shock.

In time she was brought back to Glenstal Castle, and was subsequently buried in nearby Abington Cemetery on May 16, 1921.

It was reported at the time that every window blind in Murroe was drawn down and the bells of the Catholic Church chimed mournfully until the cortege had passed fully through the village.

The sadness and devastation caused to Charles Barrington by the loss of his only daughter, coupled with some downturn in the economic fortunes of the estate at Glenstal around that time due to the gradual whittling down of the size of the estate during the Land Acts Distribution of the 1880s, had a profound effect on the Barrington family and some four years after the death of Winifred, the family decided to move to Botley in Southern England for good.

After almost two hundred and thirty years since arriving in County Limerick as clockmakers around 1750, the succeeding generations of the family had left an indelible mark on the Limerick environs, building in time The Great Castle and Estate at Glenstal, planting over 200,000 trees on the estate, developing a walled garden, and constructing in 1829, the first ever charitable hospital in Limerick city, the now iconic Barringtons Hospital, as well as part of the Limerick Docks, and the well-known Barringtons Bridge over the Mulcair River.

The loss of the Barrington family in 1925 led in time to a noticeable uplifting in the educational fortunes of the county, for some two years later in 1927, the Benedictine order in Belgium were induced into purchasing Glenstal Castle with the intention of setting up a boys boarding school, now Glenstal Abbey School, run by the Benedictine Monks, and in time firmly established as one of the premier boarding and day schools in Ireland, in the beautiful setting of The Glenstal Abbey estate.

Sadly, the very last of the original Barrington Family in Ireland, Marie Louise Barrington, died in her home in Clonasavoy House, not far from Murroe in 1947 and is buried alongside Winifred in Abington Cemetery, with the remarkable wording ‘Here lies all that could die of Winifred Barrington’ whom this short article remembers, 100 years on from May 14, 1921.