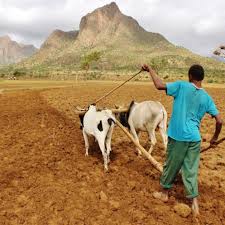 When the plough was invented in neolithic times, the straight line became necessary and so Neolithic people began to shape the landscape. They made square fields – for when you plough you need to go in straight lines. Having invented the square for ease of agriculture the next step was a square house. This may have altered our way of looking at the universe.

Straight lines are rare in nature and right angles are practically non existent…the earth is a globe and so are the planets.

When we began to think and feel in straight lines we took a big leap towards separating ourselves from nature- to feel that we were not a part of nature but something different.

Until the white man came, the Bantu tribe in Africa did not have a plough.  Cultivation was done by women once the men had cleared the ground using fire. They used a simple hoe or digging stick. The shape of the area didn’t matter and they had no need for straight lines or corners. In Africa everything is a circle – their cultivated land, their huts, pots and they remain closer to nature.

Murroe Website EditorThought for the Week – Remaining close to Nature06.20.2017