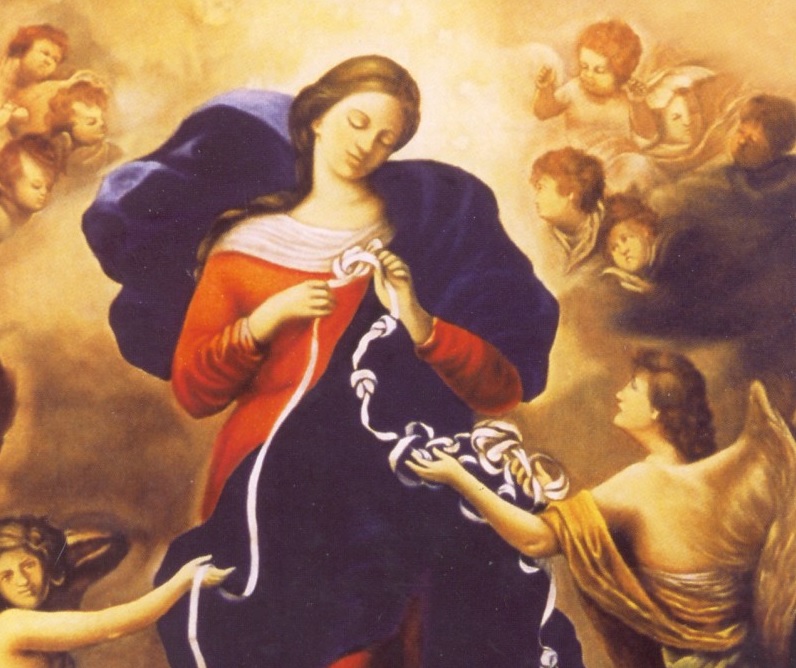 Last week we celebrated one of the great Marian feasts – the feast of the Assumption.  Father Bernard, a monk of Glenstal, used to say to me when I was having difficulties, “Mary”, ‘She’s the man for you”.  I don’t know why this phrase has stuck with me for so long ( he died year ago ) but it has and it plays back regularly.
Pope Francis has a great devotion to Mary and especially to Mary the Untier of Knots’.  This devotion goes back to the second century when St Irenaeus wrote that,  ‘the knot of Eve’s disobedience was untied by the obedience of Mary’.  In parts of Germany it has been common for centuries.
While studying in Germany, Jorge Bergoglio, the future Pope Francis, saw a painting hanging in a church in Augsburg called  ‘Mary Untier of Knots’.  He liked it and brought postcards of the image back to Argentina. He enclosed copies in every letter he sent out. An artist-friend of his painted a miniature version which was hung in the chapel of Colegio del Salvador in Buenos Aires where he was posted.
SimonThought for the Week – The feast of the Assumption08.22.2016