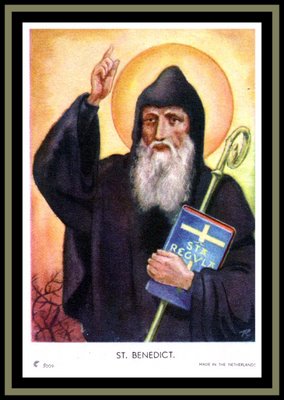 The 11th July, 2016, was the feast day of St Benedict, Patron of Europe. This feast was inaugurated by Pope Paul VI in 1964 and made official by Pope Saint John Paul II in 1999. This is an extract from a homily given by Abbot Patrick last week on the Feast of St.Benedict.

We do well, at this time of anxiety in the European community, to ponder the meaning of his privileged patronage. Shortly after the establishment of the European Community, Jacques Delors, one of its principal architects, met with some of the Benedictine abbots of Europe. He asked them, as descendants of some of the first pioneers of  European identity, to help inject a socio-spiritual dimension into a reality based on economic principles, mostly concerning the coal and steel industries in Belgium, France and Germany.

Monks, from the fall of the Roman Empire, were participators in the creation of the first European community.

Montalembert, the nineteenth-century historian, suggests that monks were the technical advisers to Europe after the invasion of the barbarians, which made it effectively the third world of that time.

Benedictine monasteries acted as agricultural colleges for the regions in which they were located. Through their efforts, modern day Germany, for instance, was transformed from wilderness to prosperity. Monks stored water from springs, taught whole regions the art of irrigation. They introduced crops, industries, production methods: in Sweden the corn trade; in Parma cheese making; here in Ireland, salmon fisheries — all over Europe, vineyards. ‘The night they invented champagne’ has been traced to Dom Perignon, bursar of St. Peter’s Abbey, Hautvilliers-sur-Marne, in 1688. His ingenuity still governs the production of champagne today.  Most of the renowned cuisine of la Bourgogne derived from menus devised at the Abbey of Cluny, a centre of European culture and civilisation for over 1,000 years, from 945 to the French Revolution.

So, just as St. Benedict and his monks rescued Europe during a time of general collapse after the fall of the Roman Empire, so too might Benedict have some interesting advice for the European Union at this time of  upheaval.