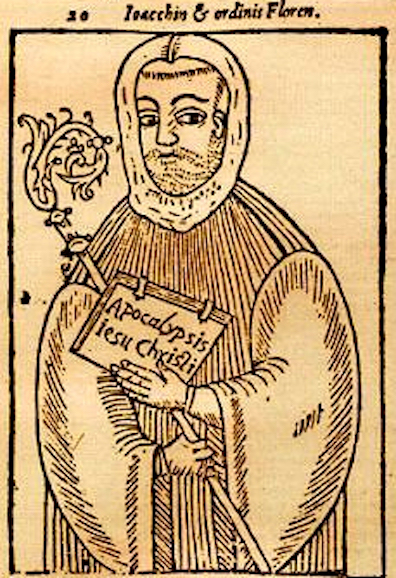 Joachim de Fiore, a twelfth century Calabrian monk, was ahead of his time – he came up with the theory of three ages. The Old Testament is about the reign of the Father(Judaism) and the New Testament about the reign of the Son(Christianity).  He believed that humanity was at the edge of a third age – the age of the Holy Spirit – that an ancient experience of the spirit was re-emerging and would proceed from the gospel of Jesus, but move beyond its focus on the Jesus of history to an experience of universal Spirit and the mystical Christ.
According to Joachim, in this third stage, we would be able to understand the words of God in their deepest meanings – understand that the spirit is holisitic, embodied, and immanent rather then transcendental and removed from our world.  He also believed, that as God speaks through the soul of human beings, the old order would collapse and its hierarchical structures become unnecessary.
The Pope of the day, Alexander IV was having none of it and condemned his theories and charged him with heresy. Heretical or not we seem to be moving into a new era.
Murroe Website EditorThought for the Week – The Theory of Three Ages05.08.2018